The History of the Fire Island Lighthouse 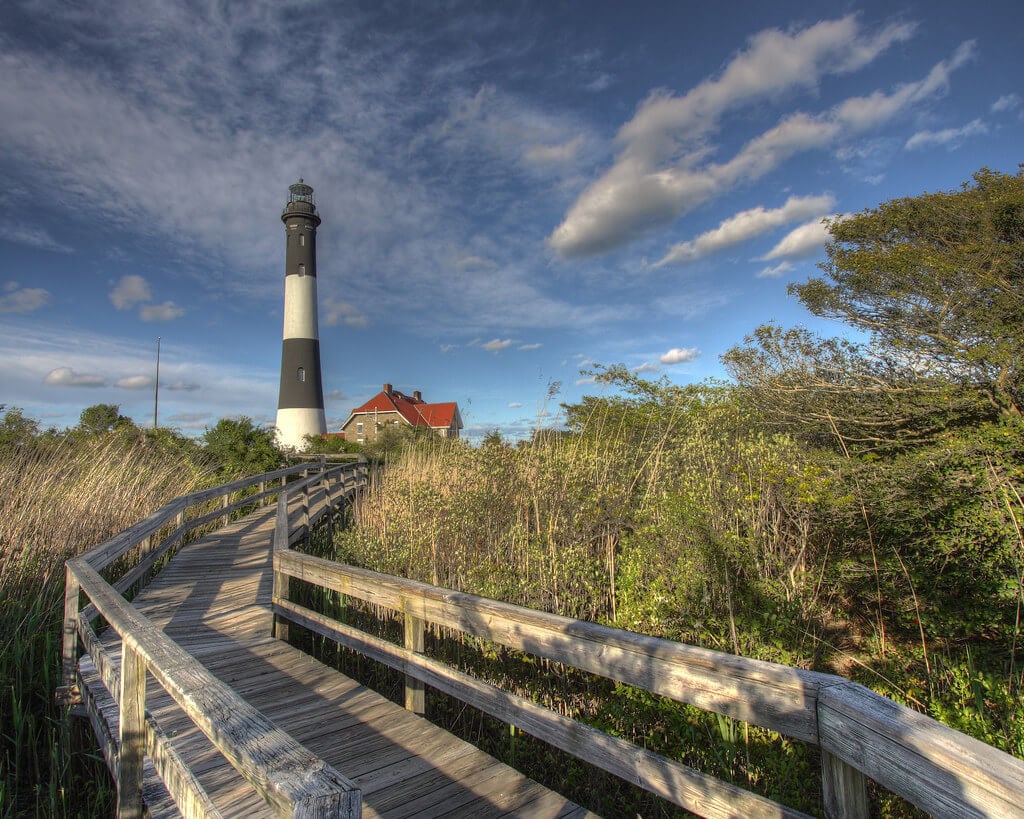 Following the Revolutionary War, New York became one of the busiest ports in America. Ships headed for New York sailed to port parallel to the southern coast of Long Island, and Fire Island’s sloping barrier beaches was apart of this shoreline.

The bathymetry of Fire Island is a ship captain’s worst nightmare. Offshore sandbars lie six to nine feet below the surface, and about a quarter mile from the shore. Most shipwrecks were caused due to hitting these unexpected sandbars, which would often snap the mast. The rise and fall of the sea would then go on to destroy the hull.

Roughly 800-900 ships wrecked off the coast of Fire Island since the middle of the 17th century!

On August 7, 1789, the federal government assumed jurisdiction over lighthouses, which had previously been administered separately by the states. Lighthouses were not present along the coast of Long Island prior to the change in jurisdiction.

The Fire Island Light, which was placed into service in 1826, was the second federally funded lighthouse to exist in the country after Long Island’s Montauk Point Lighthouse.

It was constructed of Connecticut River blues split stone, was octagonal in shape and 74 feet tall. Tapering from a 32-foot diameter base to a diameter of 16 feet at its top. Its lantern room was 12 feet in diameter. With a focal plane (or height above sea level) of 89 feet, its light could be seen for about 10-14 nautical miles out to sea.

Whale oil for the lighthouse was stored in barrels at the base of the tower, with the lamps and lighting apparatus at the top of the tower.

The lighting apparatus initially consisted of 18 lamps, mounted as three sides of six lamps each. Each lamp had a 15-inch reflector. Whale oil was used as the fuel source for the flame. The apparatus rotated and flashed a signal every 90 seconds. The clockwork mechanism was an external gear type.

The first lighthouse and its keepers house were removed, with the materials recycled into the new lighthouse and terrace. All that remains is the foundation, which can still be viewed today beside the new Fresnel Lens Building.

The lighthouse keeper and his family lived in an adjacent two-story keepers house. There was no bridge to Fire Island, so everything came by boat.

Why Construct Another One?

In 1852, Congress-following the recommendation of the United States Lighthouse Service-ordered the Fresnel-type of apparatus to be installed in all newly constructed lighthouses.

The current Fire Island Lighthouse was completed in 1858, with a state-of-the-art revolving first order Fresnel lens produced in France by the Henry-Lepaute company.

It was equipped with a first order hydraulic lamp, with 5 concentric wicks, and used Colza oil or whale oil. The 16-foot-tall, beehive-shaped glass and brass apparatus was rotated by means of a clockwork mechanism with flying pendulum. It emitted a 5-second flash once every minute. With a focal plane of 166 feet above sea level, this light could be seen from ships at least 21-23 nautical miles at sea.

This original first order Fresnel lens served as a beacon to mariners from the top of the Fire Island Lighthouse from 1858 through 1932. In 1933, it was taken out of service and displayed at the Franklin Institute in Philadelphia until 2000. 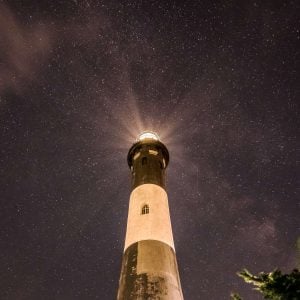 The Fire Island Lighthouse is open throughout the year and is worth visiting in any season. Walk up the 182 steps to the top where apart from the meticulous brickwork, you can take in the 360-degree views. On a clear day, you can even see the NYC skyline.

In order to access the lighthouse, you can take a ferry ride from Bay Shore to Kismet, then walk or take a water taxi to the lighthouse. Or you can drive to Robert Moses State Park, Parking Field #5 (parking fee in season). Park on the east end of the parking lot and follow the boardwalk about ¾-mile to the lighthouse.